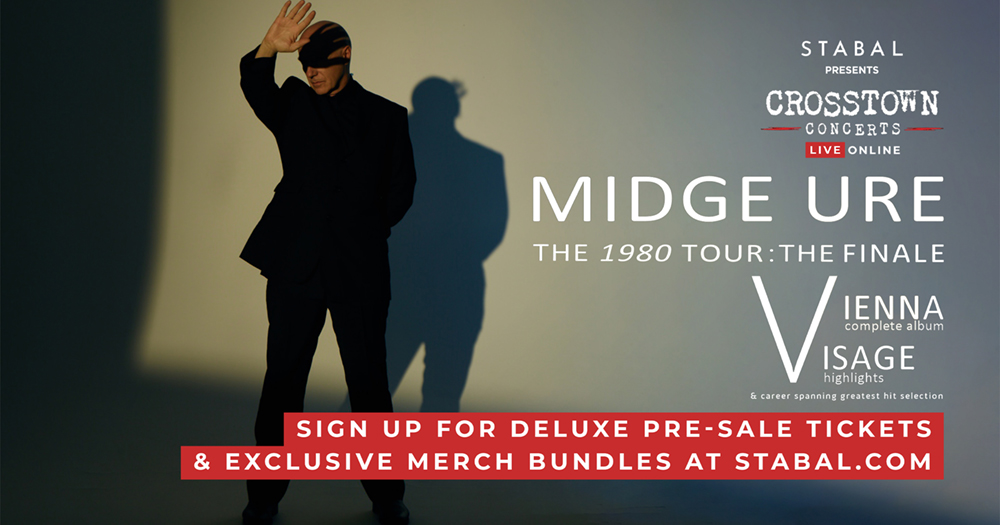 We are delighted to be able to reveal that we will be performing a very special, worldwide concert finale to The 1980 Tour with the full band– beamed directly from a covid-safe location to your home, wherever you are in the world. We’ll play Vienna in full, highlights from Visage and a selection of other hits from throughout his career. The pandemic meant we never got to finish touring this show, so we're really happy that we’ve found a way for everyone across the world to see it. bit.ly/midgeuresignup

Sorry to report that the London Palladium show has had to be cancelled, but news of a London show on the Voice and Visions show will be coming your way soon!

Following the overwhelming response to 2019’s ‘The 1980 Tour’, Midge Ure & Band Electronica are delighted to return to the road in 2022 with the ‘Voice & Visions’ tour, celebrating 40 years since the release of Ultravox’s Rage In Eden and Quartet albums.

At the start of 1981, Ultravox were laying their claim to be one of the defining acts of the 80s following the global success of hit ‘Vienna’. Heading back into the studio the same year invigorated, they recorded their second album with Ure as frontman, Rage in Eden, which hit the Top 5 in the UK album charts. Quartet, their third album with Ure, came in quick succession in 1982 with production from legendary Beatles producer George Martin. Continuing the band’s impressive chart run, it became their third Top 10 album, featuring  four Top 20 singles including the anthem ‘Hymn’.

The ‘Voice & Visions’ tour will begin at York’s historic Grand Opera House on 22nd February, visiting an astounding 26 cities across the UK before culminating at Liverpool Philharmonic Hall on 2nd April. Transporting fans back to the decade of electronics, experimentation, synthesizers and great songwriting, the albums highlights will be showcased alongside landmark hits from Ure’s incredible back catalogue.

Midge Ure said of the tour;

‘I can’t begin to tell you how great it feels to be back out touring after the uncertainty of the past two years and it is especially exciting to delve back in time and revitalise two standout albums from my career, Rage in Eden and Quartet. This is the logical and emotional follow up to the 1980 tour'

We have taken the decision to close the online store for the time being due to the combined effects of the new Covid lockdown and the continued uncertainty over Brexit. Hopefully we'll be back at some point in the New Year!

As Scala Radio focuses its January programming around the theme 'Be Healthy, Be Happy', we're delighted to welcome a new guest presenter to our ranks - British artist Midge Ure, who starts in the new year on 4th January, curating tracks for our evening programme, The Space.

Now joining Scala Radio as a guest host throughout January, Midge will bring his vast musical experience as he curates the atmospheric sounds of The Space. Midge will be specially selecting classically-inspired pieces and sharing anecdotes from his expansive career. You can expect to hear calming music from fellow pop and rock counterparts including Brian Eno, Sigur Rós, Air, Peter Gabriel and Jonny Greenwood alongside classical favourites by the likes of Grieg and Debussy.

Speaking about the new show, Midge said, “I think like me, many people are probably quite guilty of spending far too much time looking at screens in 2020 when we’ve been limited of other forms of real-life entertainment or contact.

Due to London entering Tier 3, and the continued uncertainty regarding events, the London Palladium have decided to postpone all events for the beginning of 2021. The new date for our show there is Friday 7th May. Original tickets remain valid and if you need a refund, please contact your point of sale. 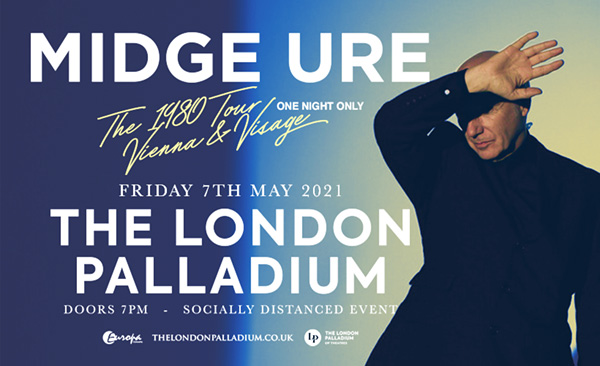 When the 1980 tour was brought to an unceremonious close by Covid in March, it all felt very unresolved. Plans for the end of the tour had to be cancelled or postponed and we did the last show in Adelaide, amidst fears we weren’t going to be able to get home.

So we were absolutely delighted to be offered the opportunity to do one final (socially distanced!) show at the London Palladium on February 3rd 2021!

Performing the entire Vienna album and selected highlights from Visage, Midge and Band Electronica will be supported by India Electric Company for this very special, post lockdown, experience!

Tickets go on general sale on Friday 13th November at 10am https://lwtheatres.co.uk/whats-on/midge-ure-2/

We are delighted that Midge has been asked to participate in the the relaunch of the Stockton Globe in Nov 2021. Tickets go on sale at 10 am on October 23rd. As per Midge's promise, we have held for a week, some free tickets for NHS/Frontline care workers UPDATE - ALL FREE TICKETS FOR NHS WORKERS ARE NOW ALLOCATED.

THE BACKSTAGE LOCKDOWN CLUB gives you exclusive, regular access to a series of intimate, musical events on a monthly subscription basis. Every month there will be at least one, (for a minimum of 45 minutes) Club Event with the opportunity to make musical requests, Q+A sessions, acoustic songs and just generally chat with Midge all live from his Environment Studio. These will usually be at 7:30 pm UK time which should allow the US and Europe to join us, and occasionally we'll do 10am slots to enable Japan, Australia and New Zealand to join in!

When we get back to being able to do normal live shows again, we have arranged for Club members to have exclusive access to tickets and, even more exciting, the opportunity to purchase, Club only, tickets for Pre Show Acoustic/Q&A sessions at some shows.

We are sorry to announce that the 2020 German tour is going to have to be postponed until November 2021.

All tickets remain valid and the new dates are as follows: